Another morning driving to work during our last week together, Ty was a little grouchy (he hadn’t wanted to get up that morning) and we had a mild discussion in the car. He said almost exactly word for word that there had to be more to life than hauling yourself out of bed, working 3 three jobs. My answer was probably that God has a purpose for us. We talked on and then he asked, more to himself and as a statement to me; how could every word spoken by Jesus be recorded exactly and written in red in the Bible. I answered that God directed and influenced the entries. He didn’t really care for that answer. He wanted something more concrete.  I didn’t want to disagree so I dropped the discussion. After I returned to work in October I was driving to work in silence having lost the ability to listen to music. I forced myself to turn on the radio every now and then for short periods. During one of those moments, Brooks and Dunn came on with a new song and I paid attention:

Believe by Brooks and Dunn 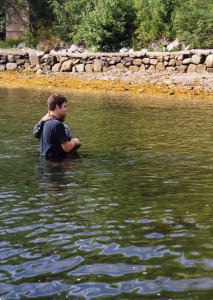 Said he was in the war when in the navy
Lost his wife, lost his baby
Broke down and asked him one time
How ya keep from going crazy?

He said I’ll see my wife and son in just a little while
I asked him what he meant
He looked at me and smiled, said

I raise my hands, bow my head
I’m finding more and more truth
In the words written in red
They tell me that there’s more to life
Than just what I can see, oh I believe

A few years later I was off at college
Talkin’ to mom on the phone one night
Getting all caught up on the gossip
The in’s and out’s of the small town life
She said oh by the way son, old man Wrigley’s died

Later on that night
I laid there thinkin’ back
Thought ’bout a couple long-lost summers
I didn’t know whether to cry or laugh
If there was ever anybody
Deserved a ticket to the other side
It’d be that sweet old man
Who looked me in the eye, said 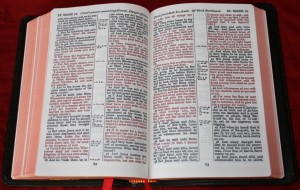 The words written in red

I raise my hands, bow my head
I’m finding more and more truth
In the words written in red
They tell me that there’s more to life
Than just what I can see

When I raise my hands, bow my head
Oh I’m finding more and more truth
In the words written in red
They tell me that there’s more to this
Than just what I can see

I believe
Oh, I, I believe
I believe